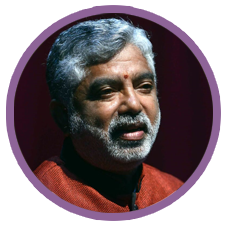 Addanda C Cariappa, Director of Karnataka’s most coveted theatre repertoire – Rangayana hails from Kodagu district in the state, which is also known as Kashmir of the South. Born in 1961 to Addanda Chengappa and Addanda Tangamma couple, Sri Cariappa was always drawn towards theatre since his early days. After turning a graduate in Bachelor of Arts, Sri Cariappa joined Ninasam to receive necessary initiation and training in theatre and related aspects. He then went on to establish Srishti Kodava Ranga and staged plays across genres for more than a decade across the state in Kannada and Kodava languages. Macbeth, Hamlet, King Lear, Oedipus, Dangeya Munchina Dinagalu, Arundhati Alaap, Tabarana Kathe and many more such plays were performed under his able direction. He has written more than 20 plays in Kodava language, and has directed children’s plays and street plays as well. More than 10 plays written by Sri Cariappa in Kannada and Kodava have been published. During his stint as Chairperson of Kodava Sahitya Academy, He organised theatre training workshop for tribal communities in Karnataka in 2012. Wearing many hats as a theatre performer and director, Sri Cariappa has directed a film ‘Bal Polandath’. The film went on to win Best Regional Film Award in state category.
He has been accorded with many prestigious awards during his career. Bhasha Samman by Kendra Sahitya Academy, Rajyotsava Award by Karnataka State Government, Karnataka Nataka Academy award, Kodava Vidya Nidhi award, and CGK award are some of the rare honours that have been bestowed upon him. His wife Smt Anitha Cariappa, is also an ardent theatre person and is a driving force behind Sri Cariappa’s pursuits in the field of theatre and literature .